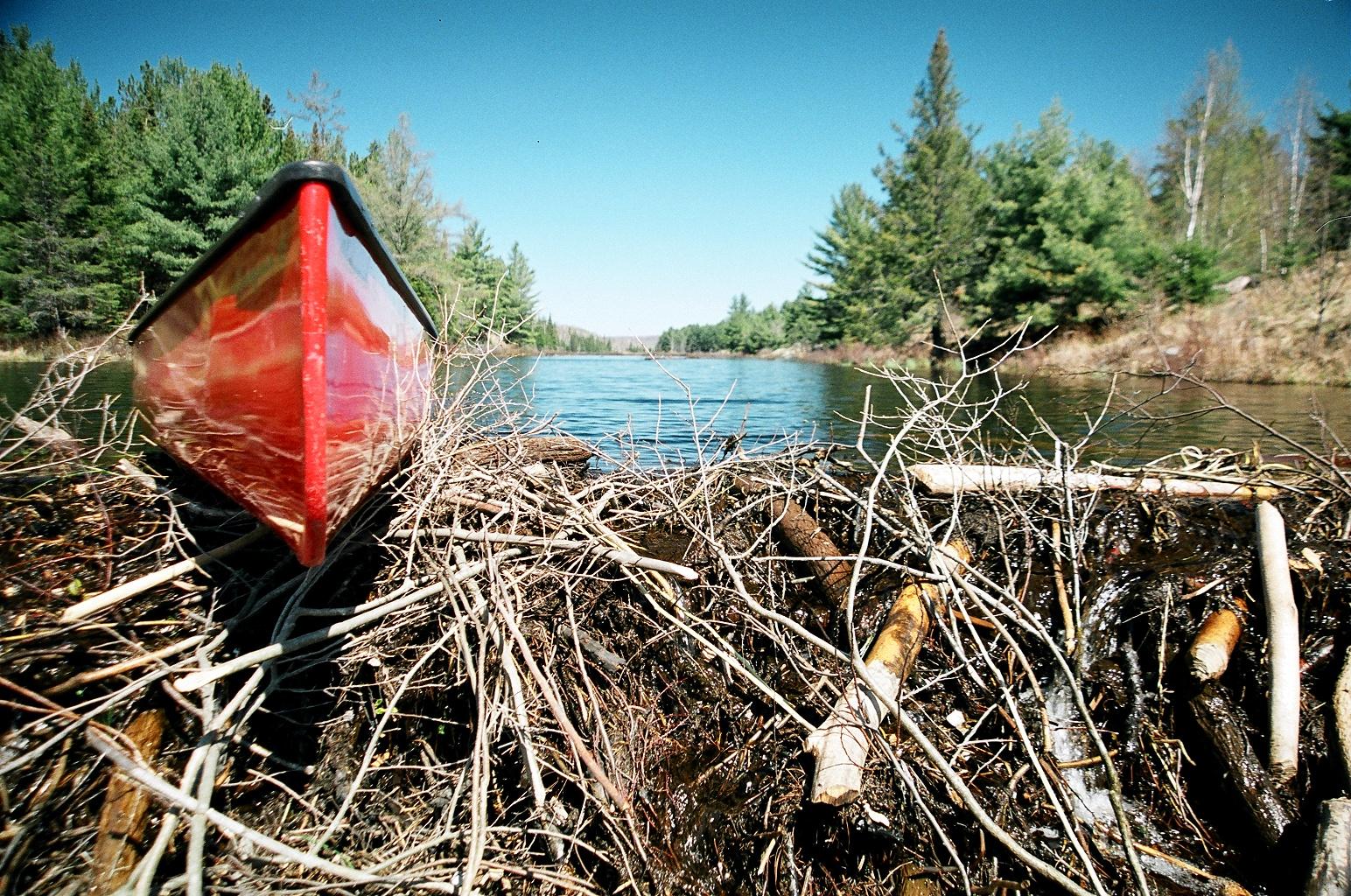 Modern-day adventurers can’t help but be captivated by whispers of the past with each paddle stroke along the Nipissing passageway. This legendary water highway that includes Lake Nipissing, La Vase Portages and Mattawa River is steeped with a rich history of transportation and trade, logging and exploration, and continues to capture the spirit today with its spectacular scenery and rugged beauty. It is truly worthy of the Canadian Heritage River System designation it dons. 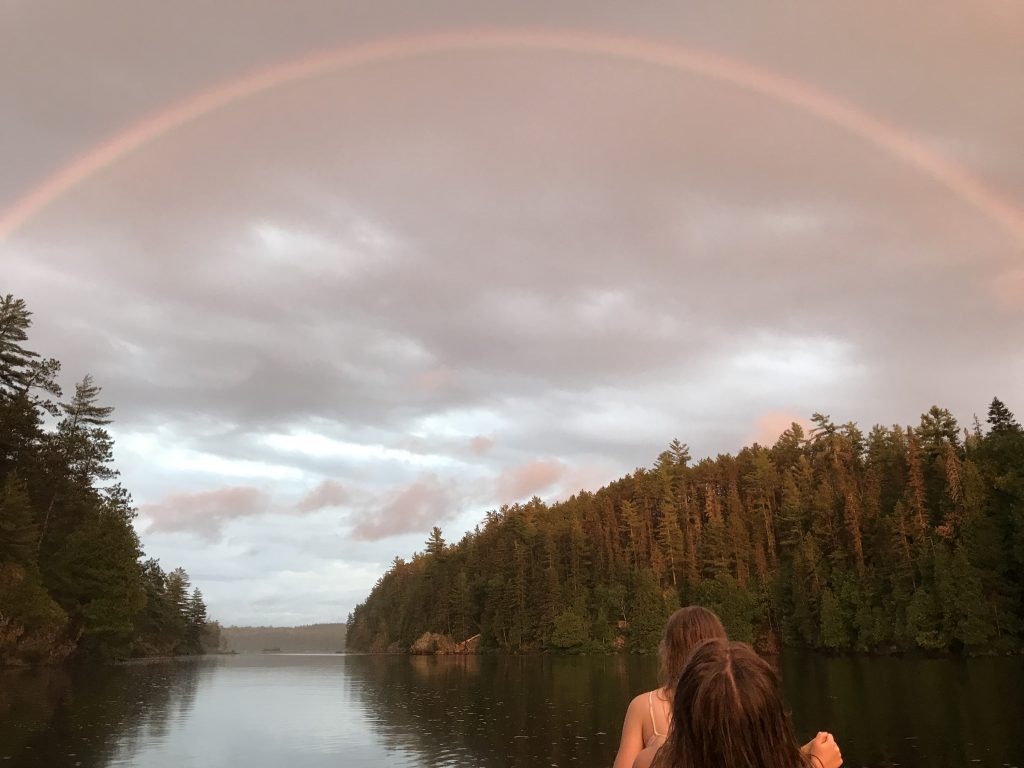 The storied past of the ancient waterways began as it always does with the deep ancestral connections of the region’s first inhabitants. Long before European contact, an extensive exchange system existed between the Anishinabek and the Huron and other Iroquoian groups to the south. What is believed to be an ancient red ochre mine and refinery used by the Indigenous people can be seen today on the northern banks of the Mattawa River downstream from Paresseux Falls. The ochre deposit is one of only a small handful of known sites in Ontario. One can imagine that ochre would have been a valuable commodity to trade for its deep red colouring used for pictographs and dying clothing. The site is protected within the Mattawa River Provincial Park, so best to admire it from the water’s edge. 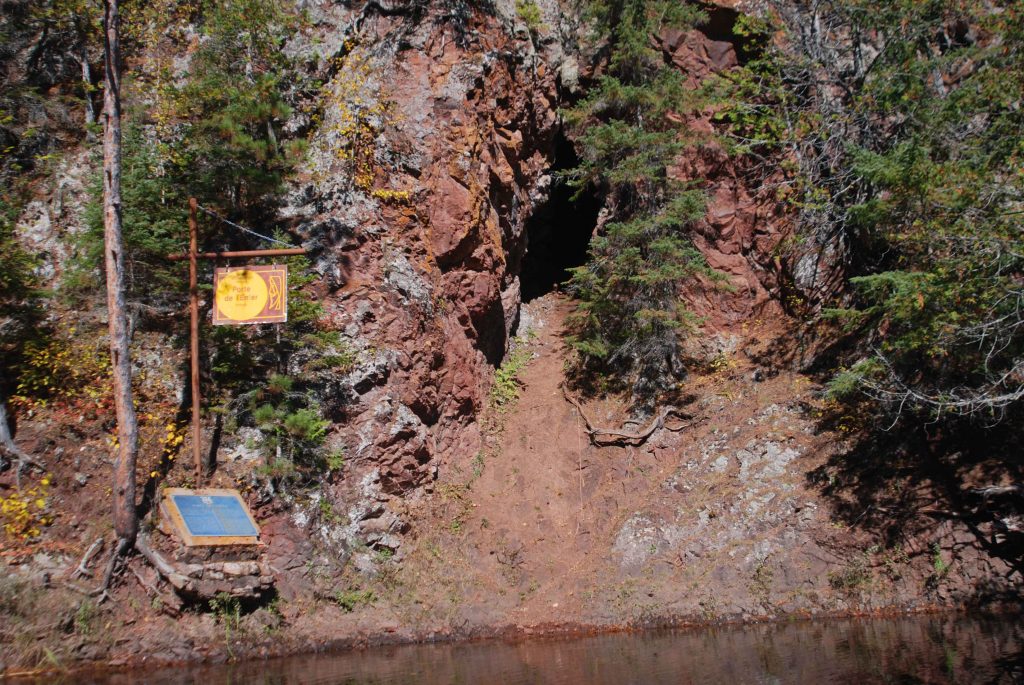 Porte de L’Enfer ochre mine on the Mattawa River; photo by Chris Mayne

The French explorer Etienne Brule was the first European on record to arrive at the area in the early 1600s learning the route from Indigenous guides. And over the next two centuries, history books show a veritable who’s who of French and British figures passing through the region as the waterways became a well-established trade route from Montreal up the Ottawa to the Mattawa River and La Vase Portages into Lake Nipissing, then down the French River into the Great Lakes. La Vase Portages in present-day North Bay cross the watershed divide between Trout Lake and Lake Nipissing. This area was infamous amongst the Voyageurs as the “mud” river with approximately 7km of “land” travel thought to be the most difficult in the entire cross-country route. Remember, these guys were carrying 600-pound canoes laden with supplies and goods to trade for beaver pelts and other furs. Parts of the historic portages have been restored today by a group of local citizens, the Friends of La Vase, with the help of the North Bay-Mattawa Conservation Authority. Each year in July, the Friends organize a Canoe Day open to paddlers that would like to experience firsthand this unique piece of our heritage.

For those who prefer a more leisurely option, a hiking trail within the La Vase Portages Conservation Area is a great place to spend the afternoon and just imagine the ancient curses of our forefathers echoing across the quiet ponds. 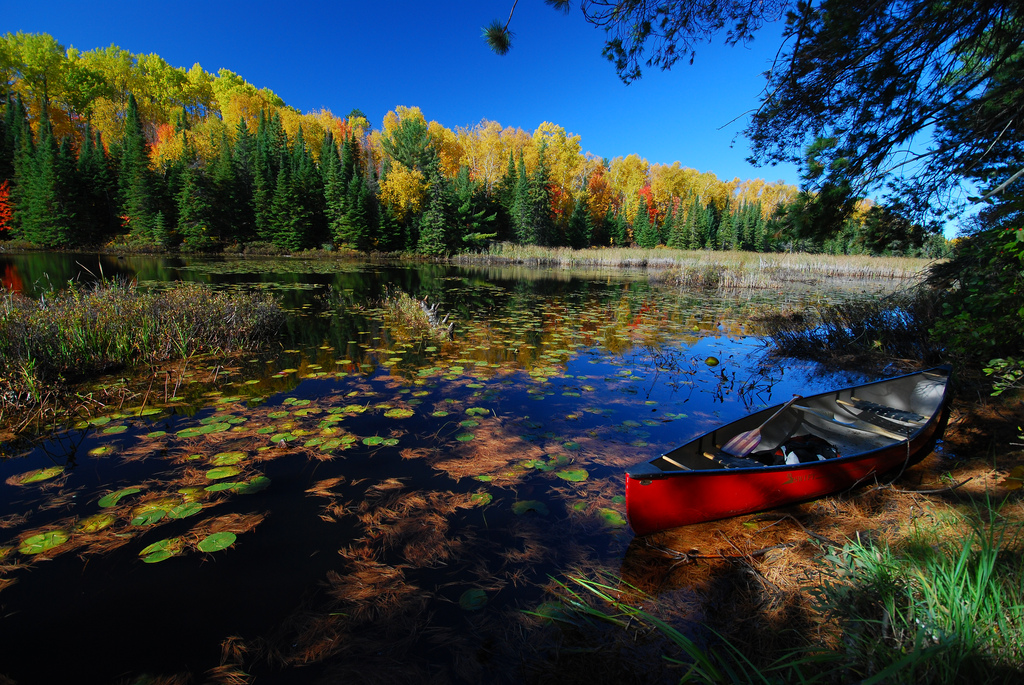 Next to arrive en masse to the area were loggers with their sights on the largely untouched stands of white and red pine. The waterways were valuable assets to the burgeoning timber industry used to transport logs to sawmills further downstream. The frequent drops along the Mattawa River created a new challenge overcome by building log slides to bypass obstacles like the Talon Chutes. The remains of an old timber chute are still visible at Paresseux Falls on the Mattawa River. 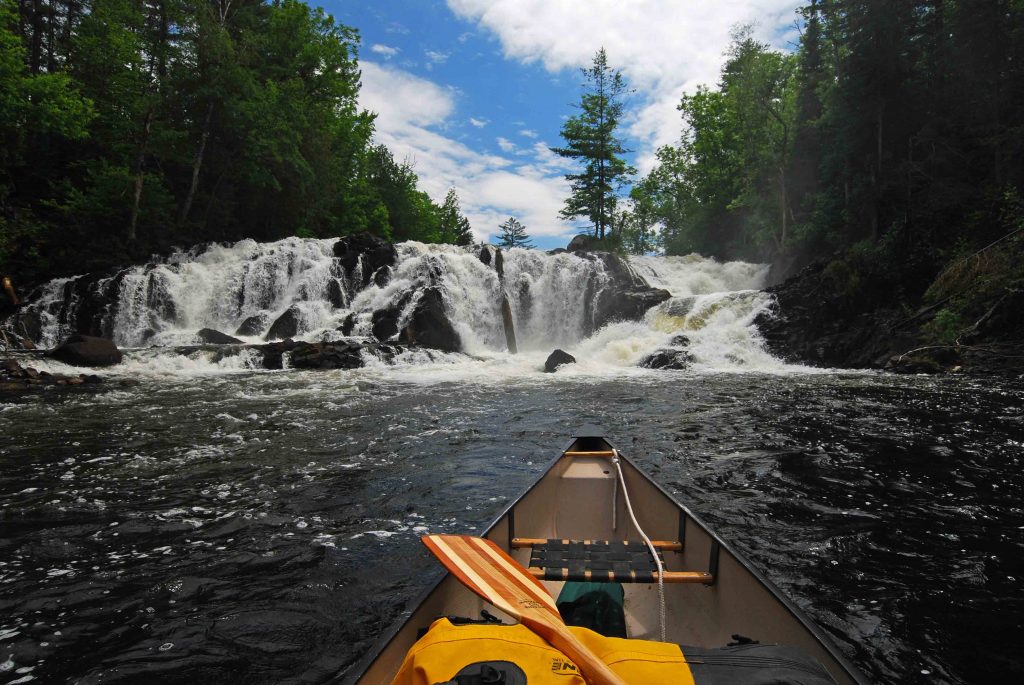 One of Canada’s most famous lumberjacks and folk hero Joe Montferrand aka Big Joe Mufferaw spent time in the area in the early 1800s. Exaggerated tales of Big Joes exploits have become the stuff of legends, with Stompin’ Tom Connors immortalizing Big Joe Mufferaw for paddling into Mattawa “all the way from Ottawa in just one day”! A 16-foot wooden statue of Big Joe stands tall at Explorer’s Point in Mattawa, where he is joined by 20 or so other historical figures scattered around the town. 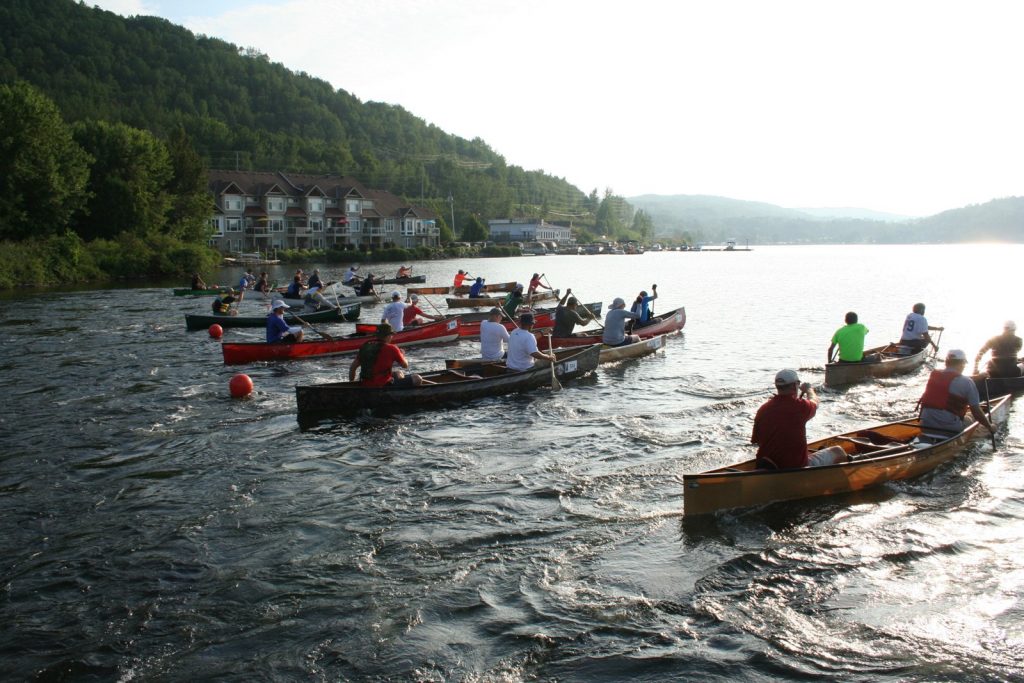 Today, these spectacular waterways continue to hold great value in the community inspiring recreational pursuits, festivals, competition and comradery. The annual Mattawa River Canoe Race is one such event that is a four-decade-old tradition and has drawn the attention of paddlers from across Canada and the US as Ontario’s most challenging race. Only a global pandemic was able to put this race on hold. The North Bay Canoe Club is another cornerstone of tradition in North Bay and has produced several world champions. From dragon boat festivals to triathlons, competition to leisure, the waterways are celebrated for the profound influence they continue to have on our lives. While the pandemic has created an upheaval in so many aspects of our lives, it is a comfort to know that these great waterways continue to flow and that they will always be around to welcome the next great adventurer. 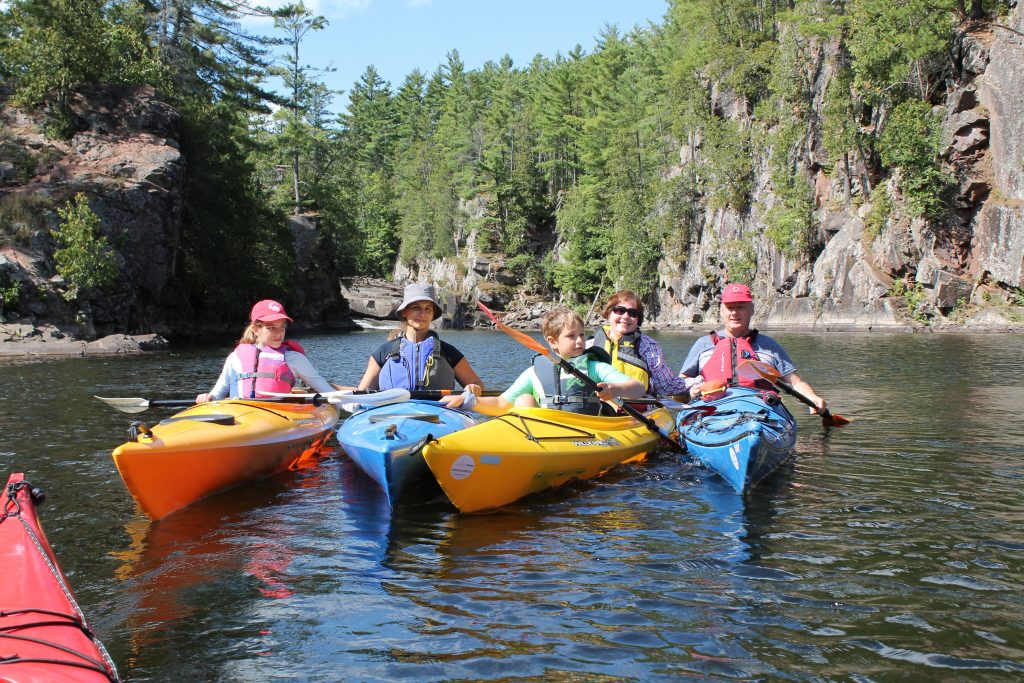 Where to start your own waterway adventure

Discovery Routes, a local charity supporting a thriving volunteer trails community, produces an Adventure Trails Map detailing parking and launch areas for day trips along the waterways and many hiking trails in the area. For more detailed portage and camping information, the Mattawa River Adventure Map is a great resource. For those that prefer to have someone else do the planning, Shockwaves Paddle Adventures organizes guided kayak trips on Lake Nipissing and the Mattawa River. And for a really unique and authentic experience, Voyageur Adventure Tours are offered out of Samuel de Champlain Provincial Park and provide an opportunity to paddle a Voyageur Canoe on the Mattawa River. 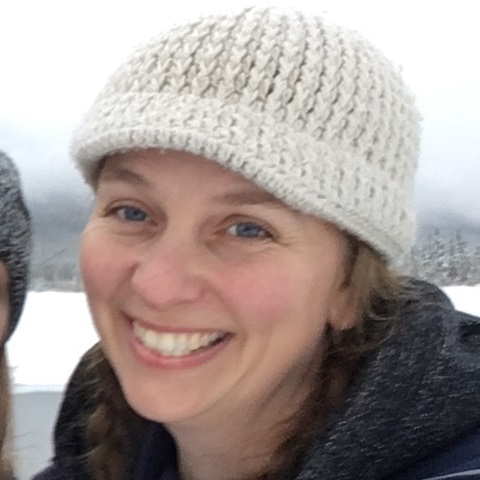 Jennifer McCourt is the Executive Director of Discovery Routes, a trails and cycling advocacy organization based in North Bay. She lives in Callander, Ontario and is always keen to explore and discover new trails with her family.